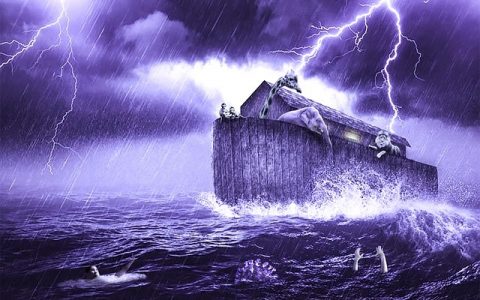 For Christians, the Bible is a valuable source of guidance and wisdom. And biblical stories are frequently reimagined in children’s books in an effort to soften some of the harsh accounts recorded. While I don’t think it’s necessarily bad, it’s easy for our children to become enamored with fancy cartoon characters of bible figures. While these characters can be fun and kids friendly, they frequently do not accurately represent the complex and multifaceted nature of the biblical account. As a result, our children may grow up with a skewed view of Christianity. Noah’s account is one of the most well-known to most Sunday School children.

Vanessa, our Children Sunday School teacher, recently introduced her class to Noah’s life of obedience. The lesson was comprised of the following three main point:

God decided to flood the earth in order to put an end to evil and selfish people’s behavior. God gave Noah all the instructions he needed to build an ark large enough to carry two of each type of animal, as well as all of the food needed for survival. Noah’s job was difficult because no one was willing to assist him. People in that country thought he was insane. Noah, on the other hand, listened to God and knew He was telling the truth about the impending flood. Despite God’s warning that the earth would be destroyed, Noah and his family would be unharmed. Noah and his family survived the flood. This occurred as a result of Noah and his family’s obedience to God’s command to build and enter the ark.

PS: It is critical that we understand that Noah found favor before the Lord not because of His own righteousness or obedience but because of the grace of God.

God promised not to flood the earth again, and He gave us the rainbow to remind us of His promise. The kids discovered the rainbow’s symbolic meaning: it represents God’s everlasting covenant of love. They also learned that God never breaks His promises. The rainbow( colors) has now been hijacked by the LGBT movement but that doesn’t change what it truly stands for.

Our hope for salvation is in Jesus, just as the ark provided safety for Noah and his family. The kids learned that as God invited Noah to enter the safety of the ark, Jesus offers us eternal salvation. God’s wrath is just and must be exacted on sin, but Jesus paid the price for us. We can be thankful that God promised never to flood the earth again. He is demonstrating His great patience towards us through this covenant.